Messaging went back and forth about some tasty 7 layer bars I made for an event. The bars were popular. They were more popular than the cookies that involved grating lemon peel, or squeezing lemon juice, cracking eggs, creaming butter, melting chocolate, chilling and cutting,  icing in elaborate patterns, and the like.

I was asked for the recipe. “It’s on the back of the can”, I said, referencing the back of the Eagle Sweetened Condensed Milk Can. But I was told that the can recipe was followed, something was different and perhaps sorcery was involved.  These being Magic and all.

This is a recipe that involves melting some butter, measuring some other stuff in rather haphazard way,  the even spreading of ingredients, and then baking and cutting.  Maybe they had a different can.  I took out a can I had in the pantry and checked it out. 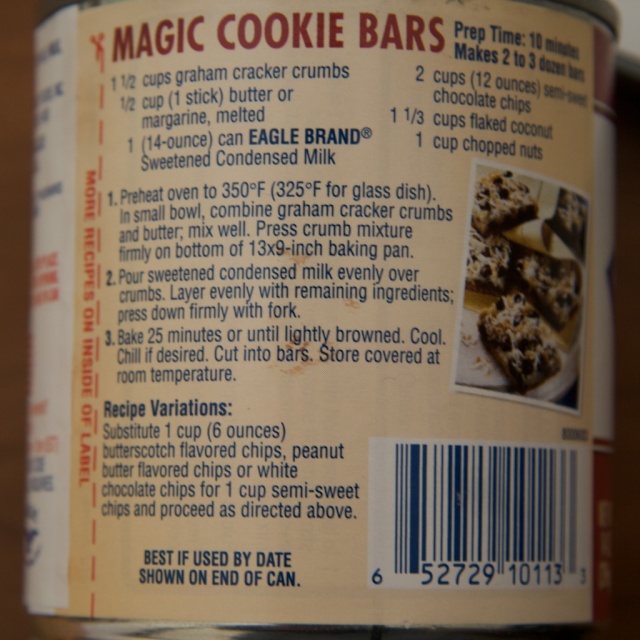 Then, I made the cookies again since the can was calling to me from the counter.

It was not until the Magic Bars were pulled out of the oven that I realized that there are minor variations to the recipe that I make every time without thinking about it.  My apologies to all those that followed the can recipe as I directed and wondered why they were not the same as the cookies I made.

Here’s the secret that I didn’t even realize was a secret: I always use a 9×9 glass pyrex dish.  (Sprayed with Pam because the carmelized condensed millk stuff on the sides turns into a metamorphic substance. )  The size of the dish matters – everything is thicker and I think gooeier (sp?) than if you were to use the recommended 9×13 pan.

I like making things, creativity, creative people, food, fabric, glass, painting, reading, my community, my family, my friends and my dogs.
View all posts by piecedgoods →
This entry was posted in Food, Recipes and tagged food, Recipes. Bookmark the permalink.