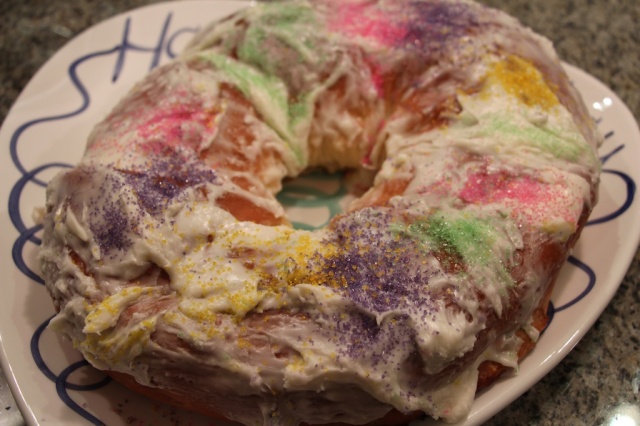 Truth be told, I’m not completely sure how Fat Tuesday is truly celebrated in New Orleans, but a group of us named ourselves the Fat Tuesday Group when we inaugurated a  lunch thing two years ago – on that years’ Fat Tuesday as it happens. (If you’re insatiably curious, type ‘Fat Tuesday’ in the search box, and you’ll get a sampling of the places we’ve gone)

This year, I made King Cake. My first one. Turns out it’s more of a sweet bread than cake, and traditionally, it’s decorated with the garish colors of Mardi Gras. Here’s the recipe I used.  Because I’m a rebel (and I was trying to reconcile this recipe with others I found on the web), I didn’t put in raisins, I didn’t make the cuts in the cake with scissors as described in the recipe (I think the sugar inside stuff would’ve leaked out and messed things up),  and I put in a blob (maybe 4 ozs) of softened cream cheese in the frosting and decreased the amount of water.

A plastic baby (symbolizing the Baby Jesus) is supposed to be hidden inside the cake.  Who ever finds the baby is the “King” for the day.

I couldn’t find a plastic baby.

I rummaged through the drawer of little silly things I can’t bear to throw away and considered a plastic fish, dinosaur, Dora the Explorer or Hot Wheels, but decided instead to go with a gummy bear because, it was closer to a baby shape, and probably wouldn’t chip any teeth if accidentally bitten.  Somewhere, someone from New Orleans is rolling their eyes big time.

In case you’re worried, the bears were not mixed up with the plastic fish, dinosaur, Dora, or Hot Wheels.